#1 New York Times bestselling author
News, a few rants, and some weird stuff.
You have not converted a man because you have silenced him.
John, Viscount Morley
Read all about it.
OCTOBER 14 2021

I've just bottled two batches of what I like to call "test sake." I won't bore you with the detail, but one was done with wine yeast and the other with baking yeast. The wine yeast one has turned out much sweeter. And I have no idea of the alcohol content in either of them. Apparently it's hard to get an accurate hydrometer reading with this type of sake, so I didn't try.

The big bonus is, of course, the mass of kasu left over, which is now in the freezer waiting to be deployed in cookery over the next few months.

I admit to being amazed that it turned out so well for a first attempt. Beginner's luck. It's a shame Mum's no longer around. We could have had some great brewing sessions.

I started brewing sake today. (And I thought the micro-organisms needed a bit of encouragement, hence the hachimaki.)

This is a major departure for me. I'm an old hand at fermented foods, but I've never made alcohol before, although my mother was a serious homebrewer and had demijohns of wine bubbling away everywhere. I'm trying a doburoku (farmhouse sake) recipe, which should give me a litre or two of nigori. If it turns out well, I'll brew a larger quantity next time. I used wine yeast instead of baking yeast (which is apparently better for doburoku) because that's what the homebrew shop said it needed, so I'll be waiting nervously for the next couple of weeks to see how it turns out.

The really useful bit is the sediment, though. Kasu makes phenomenal bread. Some people use it as a starter, but I just added it to a yeasted dough and it made the tastiest, softest bread I've ever baked. It's great for pickling and soups, too.

Nope, I don't do bullet journalling (or as we old folk used to call it, making lists) but if I did, this would probably fit the bill. I had to have it.

Rather than make entries in it, I'll just read the information pages to get me in the right mood for the day.

In other news, I want a second season of Zombie Detective, and I want it now. 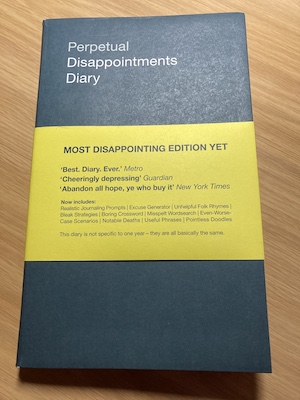 I promise I won't keep going on about my plants, but… they're ingrates. I've been reduced to wasabi-shaming.

I'm not a big wasabi fan, but I wanted to try the real stuff, and the excellent farm in Dorset that supplies my annual fix of fresh yuzu is actually a wasabi farm. So I ordered a rhizome to eat and a plant to try growing in a pot. (I have no garden.) This was in March.

The plant arrived with quite a few leaves and I lovingly recreated the closest environment I could manage to a Japanese stream bed. The rhizome went in the salad tray at the bottom of the fridge. Then I forgot about it.

The plant didn't seem to be impressed by my efforts. It kept losing leaves and its new shoots went into suspended animation. Nothing moved. Last week, I finally gave up and put it outside the front door, which never gets direct sun and would at least give it the low temperatures and higher humidity it needs. I told it what a lazy, ungrateful waste of chlorophyll it was and that it was a disappointment to its mother.

The rhizome… I never did get around to eating it. And it's sprouted lovely healthy green leaves. It never sees any light, it's extra-cold at the bottom of my fridge, and apart from the natural oxidation of the rhizome itself, it's as fresh as ever after six months.

I don't get it. Wasabi is weird stuff.


(Pix: well, you can guess, but they were both taken today.)

"I swear I haven't taken any banned substances. I'm naturally built like this."

(My latest crop of shishito peppers. The Hulk-Pepper grew from the flower with ten petals that I pictured on August 27.) 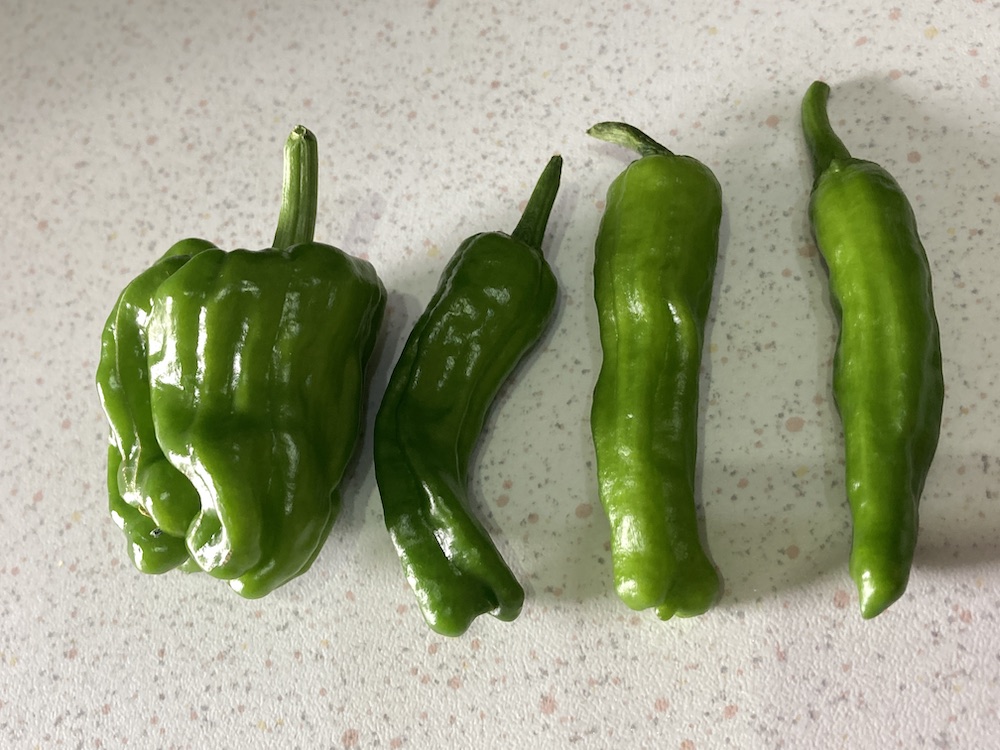 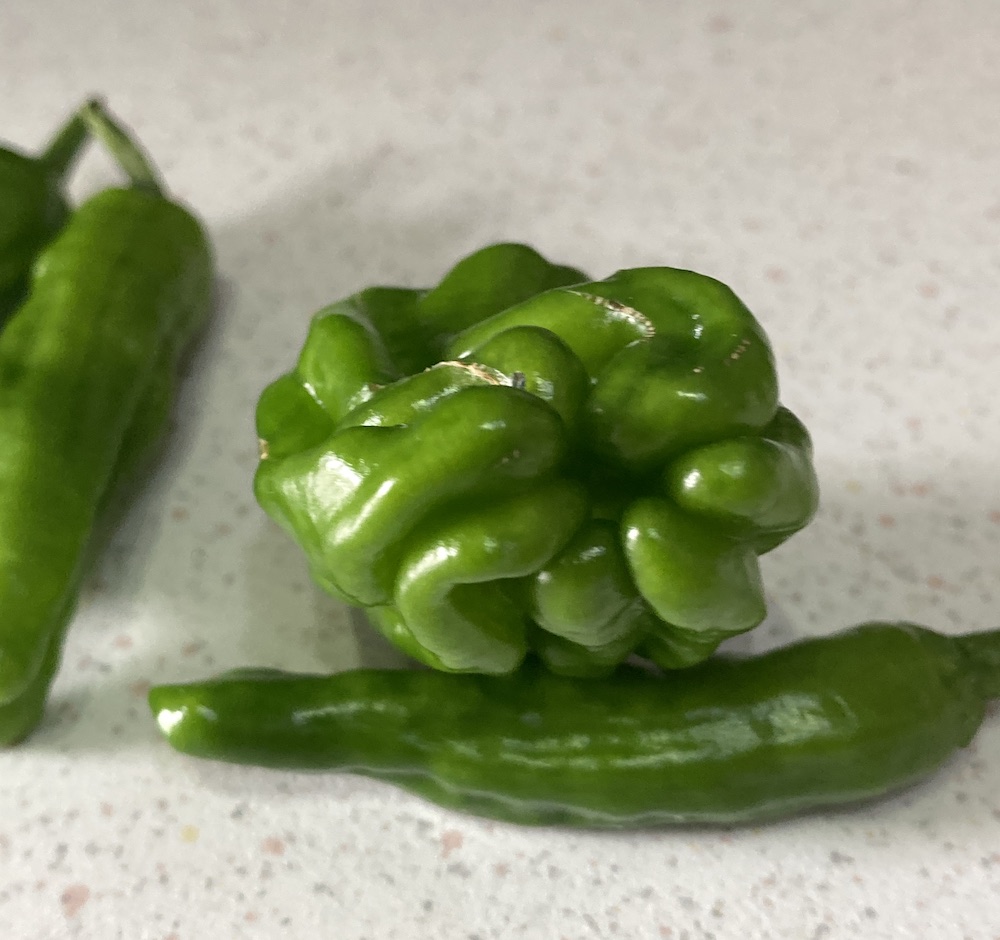 Correcting the proof of MOTHER DEATH at the moment, which has been very character-forming because InDesign, the layout software we use, decided to remove all the hyphens and merge words. So I might be some time. It's around 275,000 words. See, I always give you value for money. It's actually two books that worked better as one, to be honest, and the length of three average novels, so with THE BEST OF US, which was also extra-long, you've had almost two trilogies.

And here's a fragment of the cover detail to whet your appetite without spoiling the full cover reveal. More follows, as we used to say in the days of hot metal.

(Art by the awesome Thomas Wievegg.) 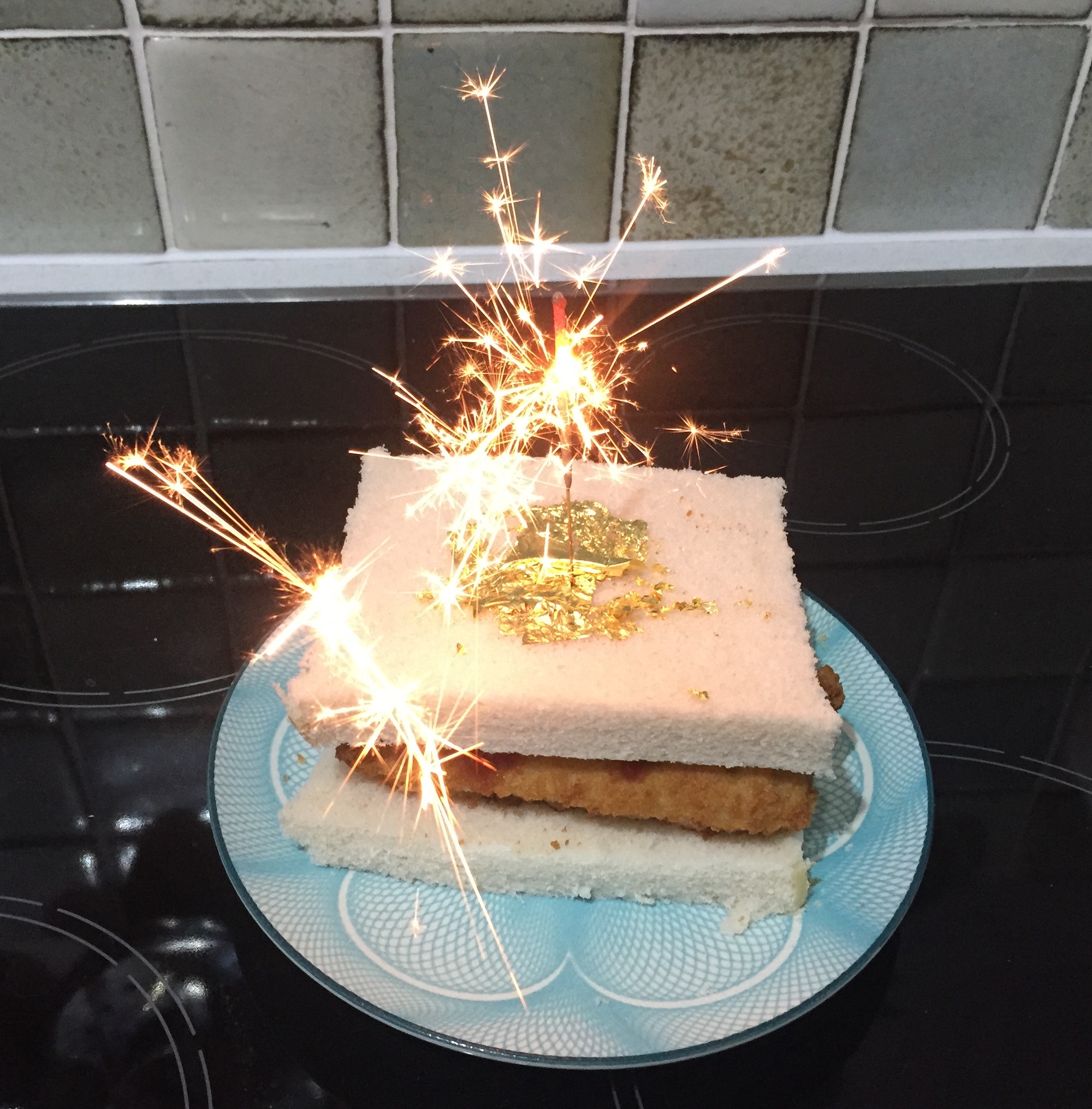 Current mood after a chat with my soon-to-be-ex utility company.

Gosh, another new web site. Yet again, I had to build it myself because I could find no man-bunned snowboarding hipster with the courage to do the job, but that's fine. At retirement age, I now have another skill I can monetise if I have to.

And the main point of this site's existence is to get you all signing up for my newsletter (also a relaunch) so that I'm not reliant on the shifting whims of big tech for you to find my new books.

I've made various attempts to get back to being the regular blogger I once was, but I don't think that's going to happen. For a start, I cut myself off from mainstream media and news-oriented forums in August 2020, and if the Martians have invaded since then, I haven't found out about it yet. It's exceptionally hard for a former TV and newspaper reporter to abandon the news, especially politics, but I feel a lot better for it, the world is still turning, and it's vindicated my worst fears –– that journalism is finally, utterly, and completely dead. I can do without that, thanks. So having no external irritant to enrage me, I have little ranting to do, and therefore not as much to blog about. My blog was mostly news on books anyway. So, I thought, there's no point in having a blog page and a news page, so I've decided to put it all here. This is what's going on in my head and what's landed on my desk. Well, not everything that's going on in my head, obviously, because I'd get arrested, but it was a case of either writing it down here or telling the houseplants all about it, and they're fed up with me.

Anyway, on to important stuff. I have some sturdy shishito pepper plants growing on the windowsill, and some of the flowers are a little… mutant. On the same plant, I have five, six, and ten-petal flowers. They're good listeners, though.

For those who want to see the old blog posts, I'm working on it. I've got a new blog plug-in to replace news and blogs as separate entities, but it can't import the previous archive. So I'll probably just fish out the FAQ-type posts and remove the rest. I'm still blogging, albeit it more succinctly, on Goodreads, mostly about anime and K-dramas rather than books.

The interesting stuff will be in my newsletter. 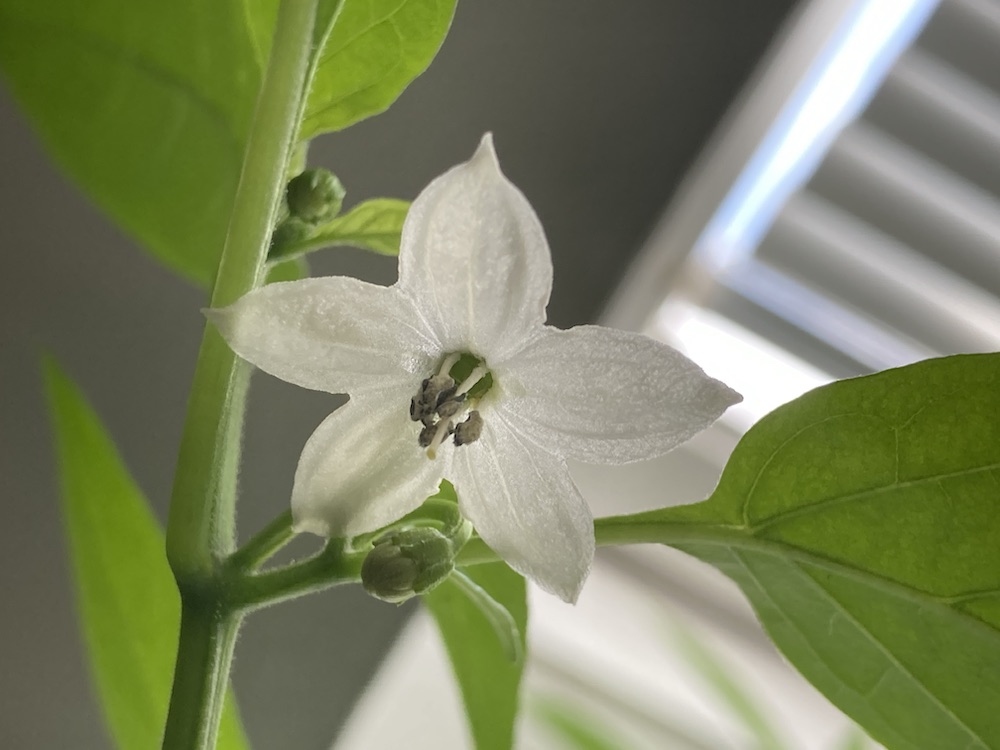 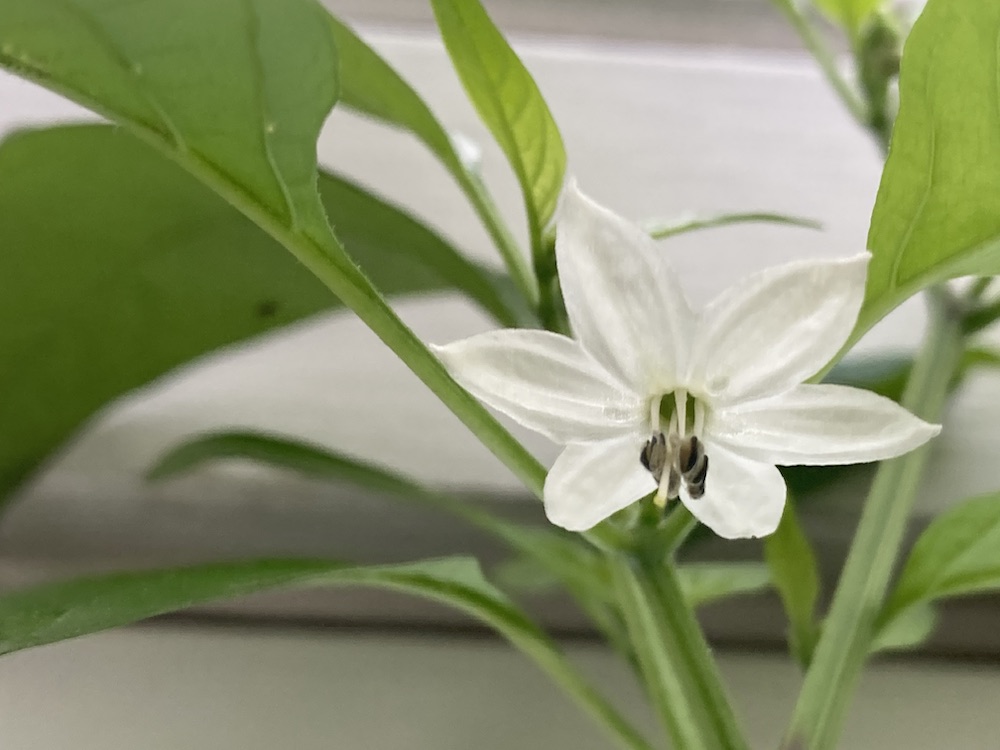 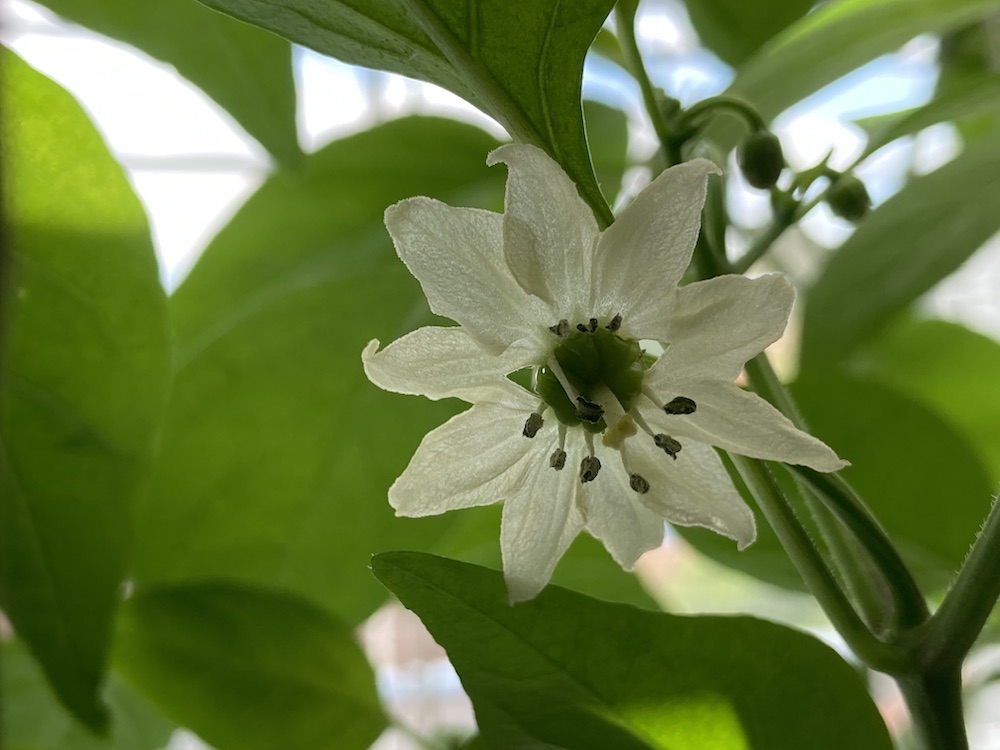